There are many causes of dizziness. The term "dizziness" should be substituted for more descriptive words to describe your symptoms. Words such as vertigo, which indicates a sensation of movement or spinning, as well as lightheadedness or faintness are more helpful to your doctor when trying to diagnose the specific cause of your "dizziness".

There are many causes of dizziness and a few of the structures that may be involved are the eyes, the inner ear, the brain and/or the neck. Disorders of the neck will generally give you ”odd“ feelings but rarely true vertigo


Why do I feel dizzy? 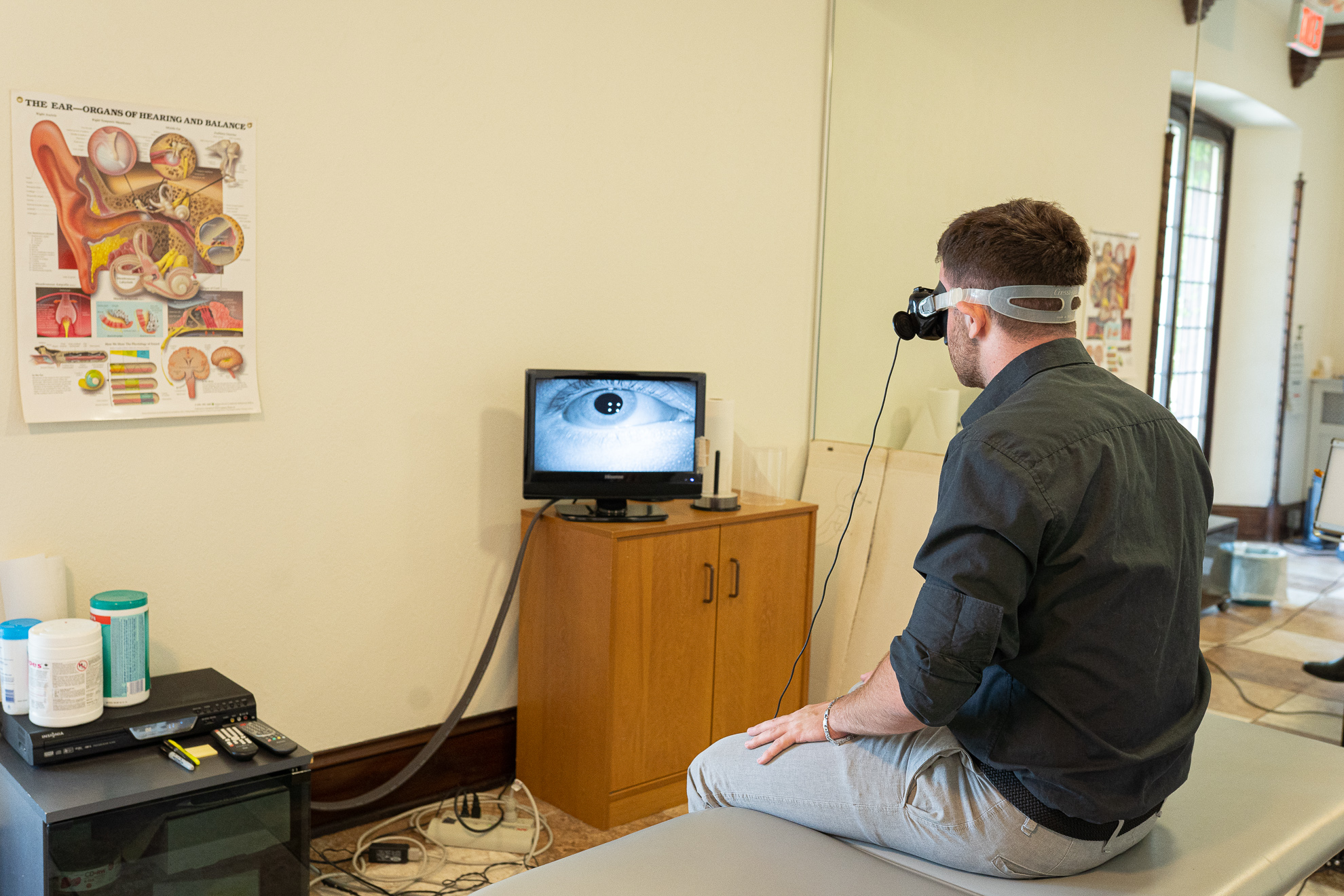 To understand why we feel dizzy, we first need to describe how the body senses movement. There are three systems or inputs that feed information to the brain regarding your head position in space:

The brain takes all the information from these three inputs and compares them against one another for consistency. If they are all telling the brain the same thing about our movement then we feel “normal” and not “dizzy”.

Benign paroxysmal positional vertigo (BPPV) is a disorder that causes vertigo, dizziness, and other symptoms due to debris that has collected within a part of the inner ear.

Sometimes this debris suddenly fall off the jelly mold and roll into one of the surrounding semi-circular tubes. These crystals will then roll around inside these half circle tubes moving the fluid and sending the brain incorrect information about how we’re moving in space. People may even experience a feeling of their eyes moving involuntarily due to the connection between the inner ear and the eyeball muscles. This connection can be stimulated by the out-of-place crystals in the semi-circular tubes, which, in turn, stimulates the eyeball muscles causing the eyes to move. This movement is termed nystagmus. 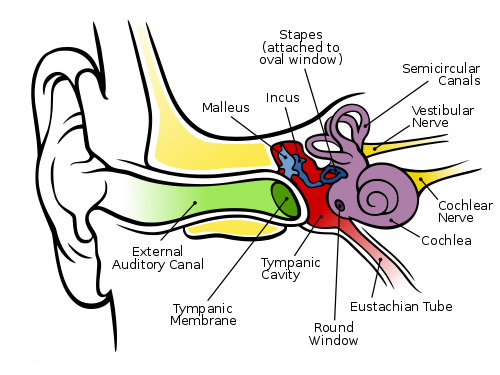 Symptoms of BPPV are almost always precipitated by a change in head position. Getting out of bed and rolling over in bed are two common "problem" motions. Some people feel dizzy and unsteady when they tip their heads back to look up. An intermittent pattern of these symptoms is usual.

The goal of therapy for BPPV is to put the out-of-place crystals back where they belong by a series of careful head maneuvers. The maneuvers that are performed are determined by which semi-circular canal has been affected. We can tell which canal is affected by looking at the automatic eye movements that are seen while you wear special infrared goggles. The success of the movements can be instantaneous. To determine if you are a candidate for this type of therapy call us.

Diagnostic tests for BPPV include tests that look for the characteristic nystagmus (jumping of the eyes), such as the Dix-Hallpike test and electronystagmography (ENG).

The goal of therapy for BPPV is to put the out-of-place crystals back where they belong by a series of careful head maneuvers. The maneuvers that are performed are determined by which semi-circular canal has been affected. We can tell which canal is affected by looking at the automatic eye movements that are seen while you wear special infrared goggles. The success of the movements can be instantaneous. To determine if you are a candidate for this type of therapy call us.


For more information on BPPV, check out our video playlist here!


Meniere's disease is a vestibular disorder that produces a recurring set of symptoms as a result of abnormally large amounts of a fluid called endolymph collecting in the inner ear.

The exact cause of Meniere's disease is not known. Theories include circulation problems, viral infection, allergies, an autoimmune reaction, migraine, and the possibility of a genetic connection. Experts also aren't sure what generates the symptoms of an acute attack. Some people with Meniere's disease find that certain triggers can set off attacks, including stress, overwork, fatigue, emotional distress, additional illnesses, pressure changes, certain foods, and too much salt in the diet.

During an attack of early-stage Meniere's disease, the main symptoms are spontaneous, violent vertigo, fluctuating hearing loss, ear fullness, and/or tinnitus. Following the attack, a period of extreme fatigue or exhaustion often occurs, prompting the need for hours of sleep. The periods between attacks are symptom-free for some people and symptomatic for others.

Late-stage Meniere’s disease refers to a set of symptoms rather than a point in time. Hearing loss is more significant and is less likely to fluctuate. Tinnitus and/or aural fullness may be stronger and more constant.

Migraine, a disorder usually associated with headache, can cause several vestibular syndromes. Migraine is extremely common. Studies suggest that more than 20 million people in the United States suffer from migraine and that about 25 percent of these experience dizziness during attacks.

Several vestibular syndromes are caused by migraine. Benign recurrent vertigo of adults (not to be confused with BPPV, or benign paroxysmal positional vertigo) consists of spells of vertigo, occasionally with tinnitus but without hearing loss. Doctors must rule out other possible causes before making a diagnosis of migraine-induced vertigo. Benign paroxysmal vertigo of childhood (not to be confused with BPPV) consists of spells of imbalance and vertigo without hearing loss or tinnitus (ringing in the ears). The majority of cases occur between the ages of 1 and 4 but may occur up to age 10. Migrainous infarction or complicated migraine is a migraine with aura associated with a stroke (blood-flow problem resulting in cell death); one of the symptoms may be vertigo.

In addition to the syndromes caused by migraine, several vestibular disorders have been associated with migraine. Studies indicate that people with migraine are much more likely than other people to experience severe motion sickness and may be more likely to suffer from Meniere's disease or BPPV.

Stress, anxiety, hypoglycemia, fluctuating estrogen, certain foods, smoking, and other factors can trigger migraine. Vertigo and imbalance secondary to migraine usually respond to the same treatment used for migraine headaches. Treatment of migraine includes eliminating from the diet substances known to trigger migraine attacks, such as chocolate, nuts, cheese, red wine, and other foods. Medications may also be prescribed.

Balance is also dependent on good muscle strength and joint mobility. A sedentary lifestyle and arthritis or other diseases of bones and muscles can compromise strength and mobility. Yet even healthy people over 65 appear to have more trouble than younger people in maintaining their balance on soft or uneven surfaces when visual cues are not available (e.g., in the dark).

Dizziness in the elderly can be a result of problems with the vestibular, central (brain-related), and vision systems, as well as from neuropathy, psychological causes, and unknown causes. Vestibular disorders, however, are thought to be the most common cause of dizziness in older people, responsible for approximately 50% of the reported dizziness in the elderly. 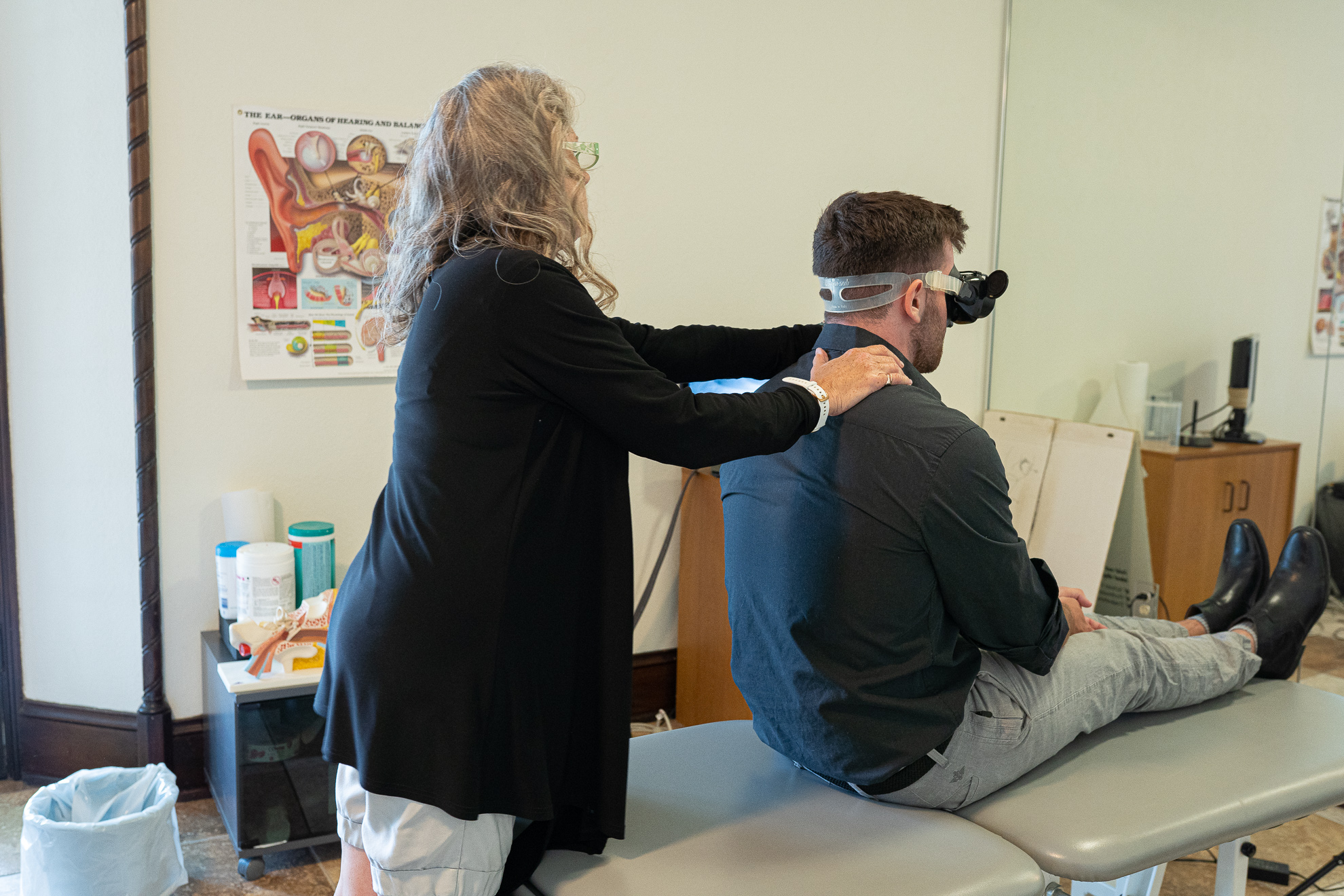 The goal of VRT (Vestibular Rehabilitation Therapy) is to retrain the brain to recognize and process signals from the vestibular system in coordination with information from vision and proprioception. This often involves desensitizing the balance system to movements that provoke symptoms.

A qualified therapist will first perform a thorough evaluation. This includes observing posture, balance, movement, and compensatory strategies. Using the result of this evaluation, the therapist will develop an individualized treatment plan that will include exercises to be performed both in the therapy department and at home and that combine specific head and body movements with eye exercises.

Some of the exercise and activities may at first cause an increase in symptoms, as the body and brain attempt to sort out the new pattern of movements. But with time and consistent work, the coordination signals from the eyes, proprioception, and vestibular system will occur.


How does therapy help?

In most cases, balance improves if the exercises are correctly and faithfully performed. Muscle tension, headaches, and fatigue will diminish, and symptoms of dizziness, vertigo, and nausea will decrease or disappear. Many times, vestibular VRT is so successful that no other treatment is required.

The vestibular apparatus is the name of the structure in your inner ear responsible for balance and thus physiotherapy designed to restore balance and a sense of stability is termed Vestibular Rehabilitation Therapy (VRT). We have included specific information about many vestibular and non-vestibular causes of dizziness for you to read. Most of this information was extracted from the Vestibular Disorders website.